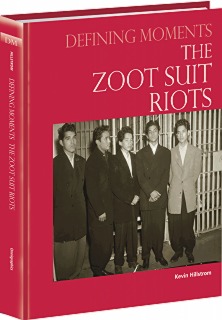 Today, the Zoot Suit Riots are widely described as an embarrassing chapter in the history of both the city of Los Angeles and the state of California. Historians describe those ugly spasms of violence as a grim reminder of the racial discrimination and fear that saturated America prior to the civil rights movement of the 1960s. Yet the riots are also described as a historic turning point for Hispanic Americans. As they surveyed the physical and emotional wreckage of that horrible week, they began charting a new path for themselves.

Defining Moments: The Zoot Suit Riots surveys the political events, social trends, and racial attitudes that contributed to a week-long outbreak of violence in 1943 by white servicemen and civilians against young Mexican-American zoot suiters. This overview sets the Zoot Suit Riots within the context of the wider Latino-American experience and provides extensive coverage of the 1942 Sleepy Lagoon murder trial and the riots themselves.

Each volume in the Defining Moments series covers a wide range of topics that students can use as starting points for further research. Potential research topics for Defining Moments: The Zoot Suit Riots are below:

"The Zoot Suit Riots succeeds in providing easy-to-read content without being overly simplified. Most teen readers and the general public will like this book's unpretentious organization and appearance. ... The content provides some useful information for assigned papers, and for adults who want an introduction to this little-known controversy in America's history. This title is a good addition to a collection with other supporting books on this topic. Because Mexican immigration continues to be a hot button issue in today's society, some 80 years after the zoot suit riots, this book will have relevance in today's classrooms. The Zoot Suit Riots is recommended for middle and high school libraries, and public libraries."

"[A] reference to a week of violence during 1943 in Los Angeles between white servicemen and citizens and Mexican Americans wearing distinctive stylish attire. ... The series is intended to inform high school and college students about otherwise little mentioned events in U.S. history, but also to introduce them to the methods of researching and writing history."