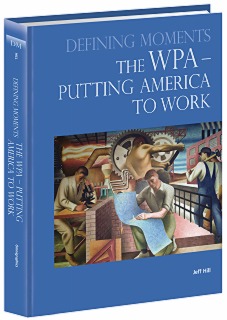 The WPA—Putting America to Work

In the depths of the Great Depression, President Franklin D. Roosevelt created the Works Progress Administration (WPA), one of the boldest initiatives ever undertaken to address mass unemployment and relieve the hardship and hopelessness that accompany job loss. That initiative, combined with other reforms and programs of the New Deal, stirred a heated debate that revolved around a central question: what role, if any, should the government play in helping those in need? This question has remained at the heart of many political deliberations in America, especially during periods of high unemployment and economic recession. The history and legacy of the WPA continue to be examined by those seeking to address economic difficulties and social problems in the 21st century.

Defining Moments: The WPA—Putting America to Work provides users with a detailed and authoritative overview of the Works Progress Administration (WPA), the centerpiece of the New Deal programs put in place by President Franklin D. Roosevelt. The volume details the impact of the Great Depression on the American people and the early relief programs of the New Deal era; it explain the origins, mission, and operations of the WPA, as well as its emergence as a flashpoint in the nation’s political battles of the late 1930s and early 1940s; and it examines the legacy of the WPA on American politics and culture.

Each volume in the Defining Moments series covers a wide range of topics that students can use as starting points for further research. Potential research topics for Defining Moments: The WPA—Putting America to Work are below:

“A solid survey of the Works Progress Administration and the Great Depression in general. The book places the WPA in historical context, giving readers background on the hardships and realities of the period and the difficult political decisions that had to be made following the collapse of the New York Stock Exchange in 1929. … This volume is a well-sourced and great reference for historical research.”

“A seminal work that is very strongly recommended for both academic and community library 20th Century American History collections.”

“A well-organized, balanced, and approachable reference source for its intended audience.”