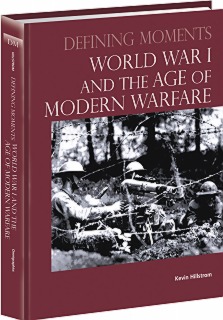 World War I and the Age of Modern Warfare

During the early 20th century, optimism and confidence about the future was rising across much of the world. Industrialization and international trade had lifted many economies to new heights of productivity and prosperity, while advances in scientific knowledge, political reforms, and exciting new artistic and cultural movements captured the imaginations of people in the United States, Europe, and other parts of the world. All of this forward momentum, however, came to a screeching halt in the days and weeks following the 1914 assassination of Archduke Franz Ferdinand of Austria-Hungary and the start of what came to be known as World War I.

Defining Moments: World War I and the Age of Modern Warfare provides a comprehensive and understandable account of the tangled alliances and simmering nationalistic tensions that triggered the Great War; discusses the misconceptions and rationalizations that guided the decisions of many world leaders during the war; details the horrors of trench warfare; describes the fearsome new generation of weapons used in the conflict; provides a broad overview of the war’s key battles and offensives; and explains how the Treaty of Versailles ensured that World War I was not, in fact, the war to end all wars.

Each volume in the Defining Moments series covers a wide range of topics that students can use as starting points for further research. Potential research topics for Defining Moments: World War I and the Age of Modern Warfare are below:

"The writing is appropriate for the target audience and the volumes are attractive and appealing. The pictures are one of the best features. With photographs from most of the adversaries as well as affected populations such as Serbian and Armenian refugees, the author has done a good job of demonstrating that indeed the conflict touched the entire European community."