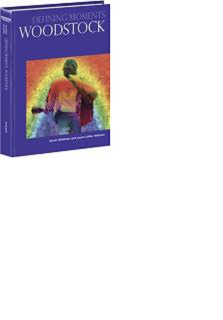 More than four decades have passed since the Woodstock Music and Art Fair. Yet the most famous rock-and-roll concert in U.S. history lives on in the memories of performers and attendees, in the expansive collection of photos and videos documenting the experience, and in the event’s lasting influence on America’s cultural landscape. Woodstock remains a potent symbol of the 1960s—or at least an idealized version of that era, when young people came together to celebrate the power of peace, love, and music over war, materialism, and racism.

Defining Moments: Woodstock provides a comprehensive account of the 1969 Woodstock Music and Art Fair, one of the seminal cultural events of the last half-century in America. The volume puts Woodstock within the larger context of the 1960s, a turbulent decade that changed American politics, culture, and music; it focuses in on the festival itself, both the preparation for the concert and the experiences of those who attended; it examines the various ways in which Woodstock has changed American popular music, both as a business and as art form; and it explores the festival’s enduring symbolic significance.

Each volume in the Defining Moments series covers a wide range of topics that students can use as starting points for further research. Potential research topics for Defining Moments: Woodstock are below:

“Woodstock became an idealized moment of an era—a three-day concert celebrating peace, free love, and great music. Woodstock describes the history of rock-n-roll and the major players on the music scene. It also includes sections on the culture—the Civil Rights Movement, the Vietnam War, and the anti-war movement.”

“Woodstock is a well-organized, balanced, and approachable reference source for its intended audience, undoubtedly reflective of the composition of the series advisory board (public and school librarians and educators). … Although its title reflects this one event in the 1960s counterculture movement, much of the information and material provides reflects the deeper meaning behind the movement and the feeling behind it.”