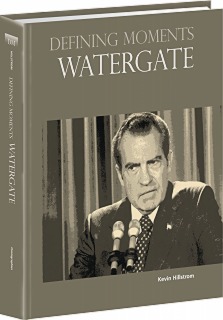 On the night of June 17, 1972, police arrested several men for breaking into and burglarizing the Democratic Headquarters, located in the Watergate Hotel complex in Washington, D.C. What no one knew (or could have possibly expected) was that the trail of the burglary would be traced back to the most powerful person in the country—Richard M. Nixon, the president of the United States. The scandal that ensued brought down his administration and changed the American public’s relationship with its government forever.

Defining Moments: Watergate presents an authoritative account of the origins and progression of the Watergate scandal. It also explores the event’s lasting impact on America’s political and cultural landscape. The volume is organized into three distinct sections—Narrative Overview, Biographies, and Primary Sources—which offer a one-stop resource for student research.

Each volume in the Defining Moments series covers a wide range of topics that students can use as starting points for further research. Potential research topics for Defining Moments: Watergate are below:

“It succeeds in giving a general audience an impartial portrayal of a major political ‘moment.’ High school students would find it useful and informative.”