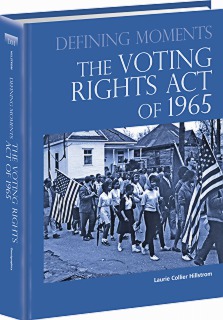 The Voting Rights Act of 1965 was not a sudden occurrence. It was the culmination of years of racial discrimination, violence, the rise of hugely influential civil rights leaders, and newly developed forms of social protest. It was a uniquely American triumph—proving that tenacity and resiliency can produce lasting change in the United States and extending the tenets of democracy to the nation’s African-American citizens.

Defining Moments: The Voting Rights Act of 1965 presents an authoritative account of the origins and progression of the Voting Rights Act of 1965. It also explores the event’s lasting impact on America’s political and cultural landscape. The volume is organized into three distinct sections—Narrative Overview, Biographies, and Primary Sources—which offer a one-stop resource for student research.

Each volume in the Defining Moments series covers a wide range of topics that students can use as starting points for further research. Potential research topics for Defining Moments: The Voting Rights Act of 1965 are below:

“Useful for those seeking a basic or starter overview of events in U.S. history, the volumes from this series are recommended for high school and public libraries.”

“The Defining Moments series will appeal to readers who are well beyond its storytelling style generally aimed at middle and high school students because of its selection of primary texts not often reproduced in other histories. … Within 200 pages, this volume ably reviews the impetus and hard-won battle for voting rights, while retaining traditional study aids such as a timeline, glossary, bibliography, and opposing viewpoints. The Voting Rights Act of 1965 is recommended for school and public libraries.”