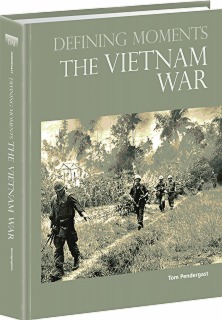 For Americans, the Vietnam War extended far beyond the battlefield. Envisioned initially as a Cold War counterstrike to slow the advance of Communism into Asia, it ultimately proved to be a catalyst for widespread social and political upheaval in the United States. It forever changed the relationship between the government, the military, and the citizens in the U.S., prompting troubled assessments and heated debates about the country’s core beliefs.

Defining Moments: The Vietnam War presents an authoritative account of the origins and progression of America’s military involvement in Vietnam. It also explores the event’s lasting impact on America’s political and cultural landscape. The volume is organized into three distinct sections—Narrative Overview, Biographies, and Primary Sources—which offer a one-stop resource for student research.

Each volume in the Defining Moments series covers a wide range of topics that students can use as starting points for further research. Potential research topics for Defining Moments: The Vietnam War are below:

"[This] useful addition to the Defining Moments series collects, in one meaty volume, a narrative history of the war’s climactic decade, 14 primary-source documents, and nine biographies of political and military leaders. ... Researchers will welcome this one-stop resource."