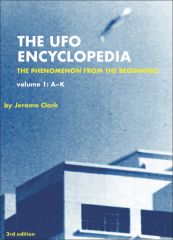 This new edition includes over one hundred new entries and offers context for the reams of declassified UFO-related documents that have been released in the United States, Brazil, and other countries; explores secret government programs that were revealed in recent years and before; and compiles and explains the UFO phenomena in all its aspects—the sightings, close encounters, investigations, debates, symposia, personalities, hoaxes, debunking campaigns, and conspiracy theories—including expert analysis of the UFO era (which began in the summer of 1947), new works that burst on the scene following release of Steven Spielberg’s film Close Encounters of the Third Kind; and historical context for sightings in the century and a half before the UFO era (when such sightings occurred even in the absence of a name for what was being seen).

“Few books on ufology are more valuable than this massive enterprise from ufology’s foremost historian.”

“A respected UFO authority provides a much-needed update of the field.”

“Probably the most comprehensive and up-to-date reference work on UFOs available at this time.”

“Should be purchased by public and academic libraries whose patrons are interested in the subject.”