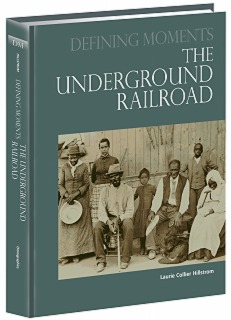 Defining Moments: The Underground Railroad provides a detailed account and authoritative overview of the Underground Railroad, the loosely organized network of safe houses and secret routes used by thousands of enslaved African Americans in the 1800s to escape to free states. It chronicles the origins and development of slavery in the United States and the corresponding growth of the abolition movement. It offers an in-depth look at the operation of the Underground Railroad and the ways in which this effort to undermine and destroy the institution of slavery fueled the sectional strife that culminated in the Civil War. The volume concludes by tracing African-Americans’ efforts to achieve civil rights and social justice since the end of slavery, and exploring the ongoing problem of modern-day slavery and human trafficking around the world. The volume is organized into three distinct sections—Narrative Overview, Biographies, and Primary Sources—which offer a one-stop resource for student research.

Each volume in the Defining Moments series covers a wide range of topics that students can use as starting points for further research.Potential research topics for Defining Moments: The Underground Railroad are below:

“Presents a detailed, illustrated overview of the Underground Railroad … An ideal reference for student report research topics and non-specialist general readers with an interest in the 19th Century American history, ‘The Underground Railroad’ is very highly recommended for personal, community, school, and university library collections and supplemental reading lists.”