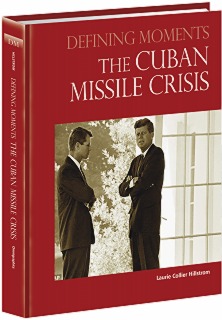 Defining Moments: The Cuban Missile Crisis provides a detailed account of events surrounding the harrowing 1962 confrontation between the United States and the Soviet Union. It chronicles the Cold War rivalry between the two nations that bloomed into a nuclear arms race, the emergence of Cuba as a player in both nations’ Cold War strategies, and the series of high-stakes diplomatic exchanges and military confrontations that took place over thirteen days in October 1962 and brought the world to the brink of nuclear war. It concludes by examining the legacy of the crisis on international relations and the continued threat of nuclear conflict today. The volume is organized into three distinct sections—Narrative Overview, Biographies, and Primary Sources—which offer a one-stop resource for student research.

Each volume in the Defining Moments series covers a wide range of topics that students can use as starting points for further research.Potential research topics for Defining Moments: The Cuban Missile Crisis are below:

“Anyone unfamiliar with the Cuban Missile Crisis will benefit from this concise review of the facts and circumstances surrounding the event and the people involved. … The work is a valuable, relatively affordable resource for beginning researchers to study the crisis and its role in the Cold War. Summing Up: Recommended. Undergraduates and community college students; general readers.”

“This well-written and engaging work takes an in-depth look at the two-week period during October 1962, when the world stood on the brink of nuclear war. … One of the outstanding features of this volume is the balanced, objective, and authoritative style of writing. …Produced with students in mind, this title would be especially appropriate for high school and academic libraries, although public libraries with strong American history collections may also wish to acquire this volume.”

“Continue[s] the mission of delving into events in American history. The Cuban Missile Crisis is an especially timely addition, given the current changing diplomatic relationship between Cuba and the US. Each volume contains a list of research topic suggestions, a narrative overview, biographies of major figures, and primary documents. … One of the great strengths of the books is the attention they give to details. … A great resource for teachers and students alike.”