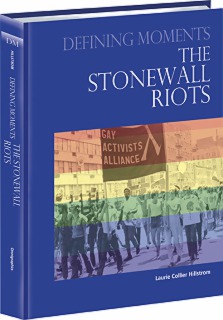 Defining Moments: The Stonewall Riots provides a detailed account of the June 28, 1969, raid on a popular gay bar by New York City police that launched a six-day series of violent protests and inspired the LGBT (lesbian, gay, bisexual, and transgender) civil rights movement in the United States. It begins by exploring the atmosphere of homophobia and legalized discrimination against LGBT people that existed prior to the riots, including the American Psychiatric Association’s classification of homosexuality as a mental disorder, state sodomy laws that criminalized private sexual acts, and the federal government’s ban on homosexual employees. It then offers a detailed account of the raid on the Stonewall Inn, the protests that rocked New York City, and their role in spurring public debate about LGBT rights. It then presents the milestones in the organized effort to secure equal rights and promote full acceptance of LGBT individuals in American society—from the AIDS crisis of the 1980s to the U.S. Supreme Court’s 2015 ruling on gay marriage—as well as the perspectives of those who have opposed this movement on religious or moral grounds. The volume concludes by examining the legacy of the Stonewall Riots in American history and the challenges that continue to face LGBT people today.

Each volume in the Defining Moments series covers a wide range of topics that students can use as starting points for further research.

“A thorough examination of this watershed event. … Provid[es] necessary context for the historic event, first by charting the centuries of oppression and discrimination that sparked the explosive incident, and second by examining the post-riot struggle for gay rights through the 2015 legalization of gay marriage. … Comprehensive, well researched, and well documented. … Especially useful as a reference work for classroom research and reference.”

“This scholarly examination of the Stonewall Riots includes a plethora of information, from an extensive historical summary to biographies of the key players of this defining moment. … Most other books on Stonewall stick to the facts of the raid on the Stonewall Inn. Hillstrom’s book offers much more than a simple story by offering the history prior to the Stonewall Riots and following up with its effects throughout the LGBT rights movement. … A key aid in understanding the LGBT movement, this book offers history and hope for interested students. ”