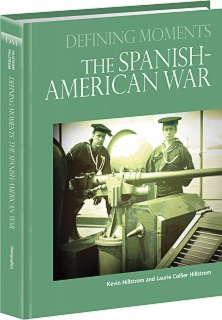 By 1898, the remnants of Spain’s once massive colonial empire were faltering. The United States seized the opportunity to shed its isolationist policy and begin its ascendance on the global political map. By the end of the war, the U.S. had secured its place as the  most powerful and influential nation of the 20th century.

Defining Moments: The Spanish-American War presents an authoritative account of the origins and progression of the Spanish-American War. It also explores the event’s lasting impact on America’s political and cultural landscape. The volume is organized into three distinct sections—Narrative Overview, Biographies, and Primary Sources—which offer a one-stop resource for student research.

Each volume in the Defining Moments series covers a wide range of topics that students can use as starting points for further research. Potential research topics for Defining Moments: The Spanish-American War are below:

"This thorough and factual resource is a good jumping-off point for high school students and will also provide an undemanding read for adult users interested in this period."

"The Spanish-American War is an outstanding resource for teaching and learning about this fundamental aspect of American history. It is designed and organized right from the start to be useful and informative. The research and documentation are outstanding, and it manages to provide good, detailed information at a level accessible to a wide level of readers. The illustrations are useful, and the index is well constructed. This reference resource is highly recommended for middle and high school media centers as well as public libraries. Academic libraries supporting remedial students will also find it very useful."