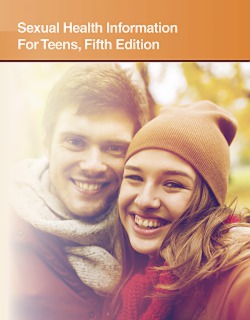 Sexual Health Information for Teens, Fifth Edition provides facts about the sexual issues teens face, including the physical and emotional changes that accompany puberty and emerging sexuality; and the risks of unplanned pregnancies and sexually transmitted diseases.

Part One: What To Expect As You Enter Puberty explains that confusing time in life when a person’s body becomes sexually mature—a process known as puberty. It talks about male and female hormones, describes the specific changes that affect boys and girls in different ways, and provides facts about the mental changes and mood swings that often accompany puberty’s physical transformations. It also discusses issues related to emerging sexuality, such as body image, gender identity, and sexual attraction.

Part Two: Protecting Your Sexual Health includes information about factors that can impact a teen’s sexual health, both in the short term and the long term. It discusses sexual choices and behaviors (including the physical and emotional risks of sexual activity) and provides facts about current sexual choices among teens. In addition, it includes chapters on sexual abuse and avoiding sexual predators.

Part Three: For Girls Only begins with an anatomical review of the female reproductive system. It addresses concerns girls often have about breast development, the menstrual cycle, douching, and routine gynecological care. It also offers facts about female medical issues, including vaginal infections, toxic shock syndrome, and endometriosis.

Part Four: For Guys Only begins with an anatomical review of the male reproductive system. It addresses concerns boys often have about circumcision, penile development, nocturnal emissions, routine urological care, and testicular injuries. It also includes information about a variety of male medical issues, including testicular cancer and gynecomastia (enlarged breasts in males).

Part Five: Pregnancy Prevention offers facts about teen pregnancy and pregnancy prevention programs, including abstinence-based programs and comprehensive sex education programs. It explains different kinds of contraceptives and how to use them correctly. It also provides information on their reliability and whether or not they protect against sexually transmitted diseases.

Part Six: Sexually Transmitted Diseases includes information about chlamydia, gonorrhea, herpes, hepatitis B, syphilis, HIV/AIDS, and other diseases that are spread by sexual contact. It describes how different types of infections are transmitted, the steps that can be taken to avoid them, symptoms that may accompany infection, available treatments, and the long-term consequences associated with untreated infections and diseases for which no cure currently exists.

Part Seven: If You Need More Information offers a directory of resources and suggestions for additional information about sexual development, sexual health, and sexually transmitted diseases.