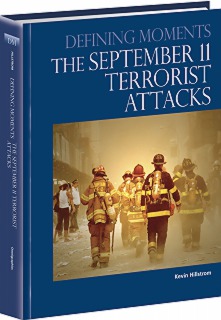 On the morning of September 11, 2001, many Americans didn’t know very much about Osama bin Laden, Islamic fundamentalism, or the al-Qaeda terrorist network. That would soon change, beginning at 8:45 a.m., when American Airlines Flight 11 crashed into the North Tower of the World Trade Center in New York City. The events of that day changed American foreign and domestic policy and world history forever.

Defining Moments: The September 11 Terrorist Attacks presents an authoritative account of the origins of the terrorist plot and its aftermath. It also explores the event’s lasting impact on America’s political and cultural landscape. The volume is organized into three distinct sections—Narrative Overview, Biographies, and Primary Sources—which offer a one-stop resource for student research.

Each volume in the Defining Moments series covers a wide range of topics that students can use as starting points for further research. Potential research topics for Defining Moments: The September 11 Terrorist Attacks are below:

"[A] well-written, objective examination. … Many of today’s secondary students have only distant memories of the attacks, and this book, written with the perspective that time allows, does a fine job of placing the attacks into the larger context of Islamic terrorism and world politics and explaining how they forever changed the United States and its relationship with Islam. … [It will] draw readers who want to understand the continuing struggle between Islam and the West, making it a good choice for most collections."

"Part of a series on key turning points in American history and culture, this volume on the terrorist attacks of September 11, 2001 provides a large collection of reference material appropriate for senior level high school and undergraduate students working in American history, international policy, and cultural studies disciplines."

"This work provides good contextual background and is recommended for high school students and lower-division undergraduates studying this epochal event, its historical background, and controversial aftermath."