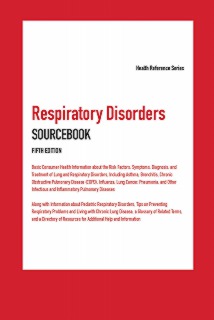 The average person takes nearly 25,000 breaths a day. When the respiratory system is working properly, most of the work is done automatically; however, for millions of people with respiratory disorders, meeting the body’s vital need to take in life-sustaining oxygen and remove carbon dioxide becomes a challenge. Infections can cause mucus that narrows the airways. Asthma triggers can cause muscles around the airways to tighten, restricting airflow. Long-term exposure to toxins, such as cigarette smoke, air pollution, and chemical fumes, can lead to a condition called chronic obstructive pulmonary disease (COPD), a progressive disease that is the third leading cause of death in the United States.

Respiratory Disorders Sourcebook, Fifth Edition provides updated information about the causes, triggers, and treatments of infectious and inflammatory diseases of the respiratory system, including asthma, COPD, influenza, pneumonia, and tuberculosis. It also discusses other conditions that impair a person’s ability to breathe, such as cystic fibrosis, lung cancer, and traumatic lung injuries. Lab and imaging tests used to diagnose respiratory disorders are explained, and a special section about pediatric concerns looks at the issues that arise when children experience breathing problems. The book also offers tips for living with chronic lung conditions, a glossary of related terms, and a directory of helpful organizations.

Part I: Understanding and Preventing Respiratory Problems describes the components of the respiratory system and how they work together to facilitate healthy breathing. It discusses factors that can impact respiratory functioning, including genetics, allergies, hormonal changes, the aging process, and exposure to toxins and irritants. The part concludes with statistical information about common respiratory disorders in the United States.

Part III: Inflammatory Respiratory Disorders begins with information about the most common chronic respiratory disorder—asthma, which affects more than 25 million people in the United States. In addition, the part describes other respiratory disorders that are characterized by inflammation. These include chronic obstructive pulmonary disease (COPD) and occupational lung diseases, such as those related to exposures to asbestos, silica, and mold.

Part IV: Other Conditions That Affect Respiration offers information about disorders and diseases that impact lung function and the ability to breath normally, including cystic fibrosis, lung cancer, amyotrophic lateral sclerosis, and muscular dystrophy. This part also discusses lung trauma and lung-related emergencies that can be life threatening, such as pulmonary embolism, pulmonary hypertension, hemothorax, and pneumothorax.