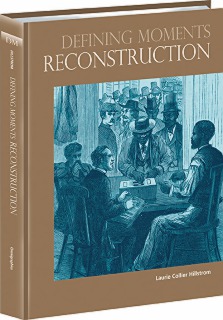 Defining Moments: Reconstruction tells the story of the tumultuous period immediately following the Civil War, when the United States faced the enormous challenges of restoring ties with the shattered South and helping four million formerly enslaved people make the transition to new lives as free citizens. The volume begins by exploring the long struggle over slavery that culminated in a bloody armed conflict between North and South. It then offers a detailed account of the postwar Reconstruction era (1865-1877), beginning with the lenient policies pursued by President Andrew Johnson, and continuing through the Radical Republican takeover, which resulted in a military occupation of the South and a brief period of equal rights for African-American citizens. The volume then chronicles the racial discrimination, segregation, and violence that characterized the Jim Crow South following the end of Reconstruction, along with the twentieth-century civil rights movement that finally fulfilled Reconstruction’s promise of racial equality and justice. It concludes by examining how the legacy of Reconstruction persists in the sectional differences between North and South today. The volume is organized into three distinct sections—Narrative Overview, Biographies, and Primary Sources—which offer a one-stop resource for student research.

Each volume in the Defining Moments series covers a wide range of topics that students can use as starting points for further research. Potential research topics for Defining Moments: Reconstruction are below:

“A detailed overview of the tumultuous 12-year period from 1865 to 1877 that followed the American Civil War. ... Teachers of secondary (high school) students will find this a quality narrative for the basics of Reconstruction.”