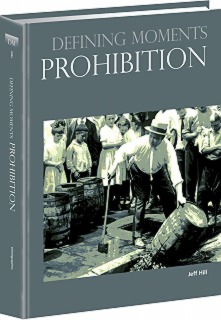 Prohibition began after the passage of the 18th Amendment to the Constitution, which prohibited the manufacture, sale, distribution, or consumption of alcohol in the United States. Though romanticized when viewed through the glittering lens of the Roaring Twenties, Prohibition was a violent, contentious, and ultimately transformative time in American society. The culmination of decades of teetotaling protests and social and religious invective, Prohibition proved that it takes more than legislation to bring about fundamental change in the ways Americans live.

Defining Moments: Prohibition provides users with a detailed and authoritative overview of the era, as well as the principal figures involved in this pivotal event in U.S. history. It also explores the event’s lasting impact on America’s political and cultural landscape. The volume is organized into three distinct sections—Narrative Overview, Biographies and Primary Sources—which offer a one-stop resource for student research.

Each volume in the Defining Moments series covers a wide range of topics that students can use as starting points for further research. Potential research topics for Defining Moments: Prohibition are below:

"This dense, hefty volume provides an in-depth historical analysis of the Prohibition era. ... This is an important curriculum resource on the social and political history of an era."

"A well-balanced view of the historical, social, and political issues surrounding Prohibition. ... This well-written title does an excellent job not only of telling the story of Prohibition, but also of giving readers a taste of the times and the people."

"Profusely illustrated with vintage photographs, this vibrant volume is sure to capture students' interest."

"Prohibition is a well-organized, balanced, and approachable reference source for its intended audience."