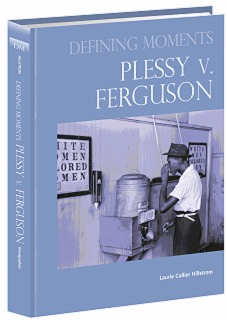 The court case Plessy v. Ferguson had a titanic impact on the lives of millions of Americans, both black and white. The Supreme Court decision relegated generations of African Americans to lives of limited economic opportunity, stunted educational options, and daily humiliations. The law also shaped the contours of life for white Americans, who benefited from Jim Crow laws that gave them enormous advantages in employment, education, and housing. The legacy of Plessy v. Ferguson continues to this day, as the nation continues to struggle with issues related to race.

Defining Moments: Plessy v. Ferguson provides a detailed and authoritative overview of events surrounding the infamous 1896 Supreme Court decision that legalized racial segregation and established separate but equal as the law of the land. After surveying historical conditions of the postwar Reconstruction era, it details the legal arguments on both sides of the Plessy case and the reasoning behind the Supreme Court’s controversial ruling. It also follows the spread of discriminatory Jim Crow laws throughout the South in the aftermath of the decision and shows how segregation affected the lives of African Americans. Finally, this volume covers the courageous efforts by civil rights activists to overturn Plessy and gain legal and social equality for black citizens.

Each volume in the Defining Moments series covers a wide range of topics that students can use as starting points for further research. Potential research topics for Defining Moments: Plessy v. Ferguson are below:

“High-school students will likely find this, and others in the Defining Moments series, a boon for writing the dreaded historical-research paper. Rather than identifying and poring over sources for their research, readers can find here a one-stop shop: ideas for related topics; vetted, in-depth, well-documented, and interestingly written descriptions of the subject; biographies of important related people; full-text primary source documents; relevant places and terms; a chronology; and more. In short, a wonderful place to begin.”

“For many students today it may be hard to image a time when segregation was a fact of life and questioned by few. The book examines how the Plessy v. Ferguson case came to be and the legacy it left on race relations for decades after it was stated. … Adult lay readers and college students looking for a more detailed discussion of the case and its context may also want to read this title to understand the political, social, and economic factors that led to this decision as well as how it promoted racial tension and social segregation for years to come. … Recommended for public, school, and academic libraries.”

“An important source book to the historiography of the landmark case Plessy v Ferguson. …Aimed at students and anyone wishing to learn about American’s struggle and successful efforts to extend civil rights to all citizens. … Highly recommended.”

“Provides a wealth of background material, primary sources, and ideas for student research papers on the fight against Jim Crow laws. Students will appreciate the book’s larger type and its many b&w historical photos, political cartoons, and illustrations. The book offers a narrative overview of the rise of Jim Crow laws, the case and its legacy, and the efforts of the Civil Rights movement to overturn Plessy v. Ferguson, and provides biographies of key figures on all sides of the case.”