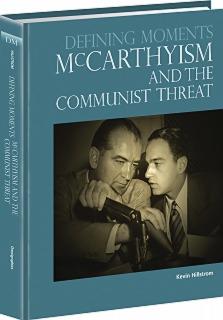 McCarthyism and the Communist Threat

America in the 1950s was attacked by an invisible enemy—The Red Scare. As the Cold War with the Soviet Union reached its apex, so did fear and paranoia of communist subversive activity in American society, culture, and, most significantly, politics. It took a junior senator from Wisconsin with a knack for Puritan-style invective to exploit these concerns and launch a Congressional career of startling trajectory. Thus began McCarthyism—the systematic purge of anyone and anything communist from American politics and society. No one was safe, and by the time McCarthy was censured in 1954, the very foundations of the First Amendment had been tested.

Defining Moments: McCarthyism and the Communist Threat presents an authoritative account of the origins and progression of Senator Joseph McCarthy’s staunch anti-Communist politics in 1950s America. It also explores the era’s lasting impact on America’s political and cultural landscape. The volume is organized into three distinct sections—Narrative Overview, Biographies, and Primary Sources—which offer a one-stop resource for student research.

Each volume in the Defining Moments series covers a wide range of topics that students can use as starting points for further research. Potential research topics for Defining Moments: McCarthyism and the Communist Threat are below:

“The era of McCarthyism and the Communist Threat lends itself well to the format of this series. The topic is not too broad but has a variety of historical events that can be touched upon leading up to this movement, and explains in detail the origins of American fears about Communism, Communist activity in the United States, and how the Cold War influenced anti-Communist sentiments within the country. … This title will serve as a useful starting point for research on this topic and will serve its intended audience well.”

“McCarthyism and the Communist Threat provides a detailed history of the rise and fall of Senator Joseph McCarthy and his politics, which changed the culture and politics of this country. High school to college-level readers will find this a clear survey explaining the history of American perceptions of communism, Communist activism in this country, and the political rise of McCarthy himself. Biography blends with history in a recommendation for any American history student.”