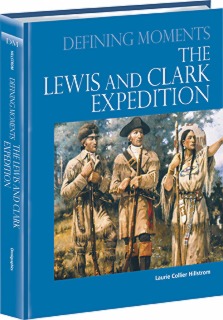 The Lewis and Clark Expedition

Defining Moments: The Lewis and Clark Expedition provides a detailed account of the epic journey through the unknown western wilderness undertaken by Meriwether Lewis, William Clark, and their Corps of Discovery in 1804-1806. It begins by chronicling President Thomas Jefferson’s efforts to wrest control of the vast Louisiana Territory from France and his determination to mount an expedition to map the region and catalog its flora, fauna, and Native American inhabitants. It then offers a detailed description of the explorers’ struggles, triumphs, and discoveries as they make their way across the rugged continent and finally reach the Pacific Ocean. It then discusses how the successful expedition served as a milestone in opening the American West for settlement—at the expense of the Native American cultures encountered by Lewis and Clark. The volume concludes by examining the legacy of the Lewis and Clark Expedition in American history and imagination. The volume is organized into three distinct sections—Narrative Overview, Biographies, and Primary Sources—which offer a one-stop resource for student research.

Each volume in the Defining Moments series covers a wide range of topics that students can use as starting points for further research. Potential research topics for Defining Moments: The Lewis and Clark Expedition are below:

"Brings together the most essential information regarding the courageous Lewis and Clark Expedition and conveys it all in a variety of intelligent, focused ways. Arranging the book into three well-delineated sections provides readers with easy access to this rich and engaging history. ... This Defining Moments title is sure to engage readers in the fascinating historical topic at hand.”

"The Lewis and Clark expedition, aided by the legendary Sacajawea, is a well-covered topic in history, but this volume in the Defining Moments series still manages to add interesting details. ... A quality resource for both the media center and the classroom."