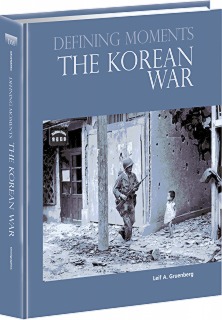 America’s Forgotten War was one of both precedence and importance. The opening salvo in what would be a 50-year Cold War against communism, the American military foray into Korea began with a tactically brilliant naval landing at Inchon and ended with a bittersweet truce between North and South that lasts to this day. The Korean War, considered an overlooked and underanalyzed lesson in military intervention fueled by political intrigue, provided a hazy first look at the future of modern military intervention for the United States.

Defining Moments: The Korean War provides users with a detailed and authoritative overview of the conflict, as well as the principal figures involved in this pivotal event in U.S. history. It also explores the event’s lasting impact on America’s political and cultural landscape. The volume is organized into three distinct sections—Narrative Overview, Biographies, and Primary Sources—which offer a one-stop resource for student research.

Each volume in the Defining Moments series covers a wide range of topics that students can use as starting points for further research. Potential research topics for Defining Moments: The Korean War are below:

“Recommended for both high school and college-level collections. … [The Korean War provides] a blend of biographies, historical overviews, and primary source documents of the times to follow key changes and transformations which changed U.S. and world policies. The three major sections allow students to receive clear discussions of important period moments.”

“This is a good volume for high school libraries, and it is inexpensive.”