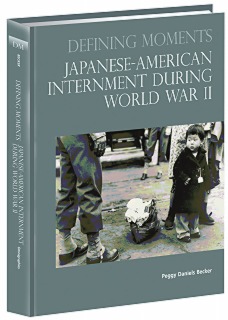 Less than 48 hours after the Pearl Harbor bombing, the federal government began rounding up Japanese immigrants for questioning. The attack on Pearl Harbor signaled the beginning of a four-year period of turmoil, disruption, chaos, and fear for people of Japanese descent living in America. Within a few months of the Pearl Harbor attack, the U.S. government imposed a mandatory evacuation from the Pacific Coast of all people with Japanese ancestry. All Japanese immigrants and their children—including those who held U.S. citizenship—were relocated from their homes and forced into remote, jail-like facilities called internment camps scattered across the country. As they entered these bleak camps, many wondered if they would ever be accepted as Americans—or if they would ever see freedom again.

Defining Moments: Japanese-American Internment during World War II provides a detailed and authoritative overview of internment, one of the most controversial aspects of America’s otherwise triumphant intervention in World War II. The volume explains how the Japanese attack on Pearl Harbor led to the evacuation and internment of Japanese immigrants and Japanese Americans; summarizes evacuation and internment procedures; details living conditions in the camps; discusses the economic, emotional, and physical toll of internment on Japanese-American families and communities; and ponders the legacy of internment on American society.

Each volume in the Defining Moments series covers a wide range of topics that students can use as starting points for further research. Potential research topics for Defining Moments: Japanese-American Internment during World War II are below:

"A comprehensive overview. … The author's engaging, simple style, combined with a visually enticing layout, will appeal to young readers, or to older readers who want a quick review. … Excerpts from primary sources (a staple in recently published histories for teenagers) encourage young students to read these sources-when the full texts would otherwise be too daunting. A brief summary and analysis precedes each document. A bibliography gathers references suitable to the book's target audience-high school students but also sources that would be useful to college students. …. Recommended for public, school, and academic libraries.”

"Contain[s] thorough explanations of the events, including extensive use of period photos, historic primary documents, and eyewitness accounts. Key background information is included, providing the reader with context for the events. Also included are inset pages highlighting notable people or customs. These pages add entertainment value, as well as provide important anecdotal information.”