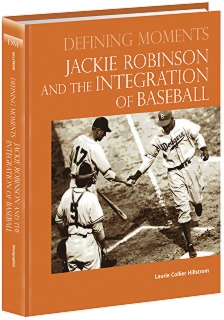 Jackie Robinson and the Integration of Baseball

A landmark event of the African-American civil rights movement took place on April 15, 1947. This event was not a court ruling, or a protest march, or a speech. It was a baseball game between the Brooklyn Dodgers and the Boston Braves. When the Dodgers trotted out of the dugout at Ebbets Field and assumed their defensive positions to start the game, the rookie first baseman wearing number 42—Jackie Robinson—became the first black player in Major League Baseball.

Defining Moments: Jackie Robinson and the Integration of Baseball provides a comprehensive account of Robinson’s life and career, with a detailed and authoritative overview of the events surrounding the shattering of Major League Baseball’s longstanding color barrier. It also discusses Robinson’s life after baseball—especially his influential position in the African-American civil rights movement—and explores his enduring legacy as a racial pioneer in the game of baseball and in American society.

Each volume in the Defining Moments series covers a wide range of topics that students can use as starting points for further research. Potential research topics for Defining Moments: Jackie Robinson and the Integration of Baseball are below:

“This work provides a detailed account of the events that occurred leading up to April 15, 1947 when Major League Baseball’s longstanding color barrier was in place and the role that Jackie Robinson played in that monumental occasion. For young people today who did not grow up during the era of segregation in sports, this work may be particularly shocking and disturbing. … [The author succeeds] in her effort to provide an objective and balanced account of a shameful period in American history. … Young students interested in baseball, the history of sports in America, and racial relations in America could benefit from more titles in [this] series.”