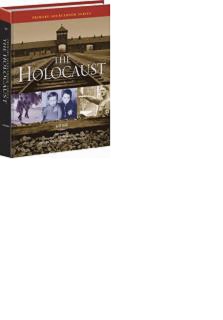 Primary Sourcebook Series: The Holocaust assembles 100 primary documents to help users gain a greater understanding of this grim but pivotal era in world history. This volume includes excerpts from a wide array of speeches, bills, reports, oral histories, personal memoirs, editorials, letters, and other primary documents. The voices included here range from political leaders and diplomats to journalists, activists, and ordinary citizens. Their documents are arranged in chronological sections or chapters that contain introductory material that explains the larger context in which the documents were created.

The Holocaust provides extensive coverage of all major aspects of the Holocaust, including the historical roots of anti-Semitism, the rise of Adolf Hitler and the Nazi Party, Kristallnacht, the progression of Nazi policies and actions toward the Final Solution, the struggle for survival in the ghettos and death camps, stories of hiding and escape from the Nazis, the final liberation of the death camps during the last weeks of World War II, and later stories from survivors and their families.

A few of the notable primary sources in The Holocaust:

Other valuable features provided in this volume include a foreword by Stephen Feinstein, Director of the Center for Holocaust and Genocide Studies; glossary of important individuals and terms; detailed chronology of events; extensive bibliography of works consulted in the creation of the book, including books, periodicals, internet sites, and other media materials; and a subject index. For a more complete understanding of the coverage offered in Primary Sourcebook Series: The Holocaust, please see the Sample Pages.

“Omnigraphics has published an excellent one-volume overview of the Holocaust. Librarians and students will find the reference informative and insightful in understanding the causes, effects, and fundamental facts of this twentieth-century tragedy. … So many books have been written about the Holocaust, but this one stands out from the rest. … This book is highly recommended for high school students, adults, synagogue libraries, and religious libraries with references to World War II.”

“Hill has done an outstanding job of putting together this unique resource. …  This must-have sourcebook provides libraries with the needed documentation/evidence for students to better understand the topic. It lends necessary curriculum support, helps teachers meet their state standards, and will aid in required assessments.”

“This is a well-organized, reasonably priced resource that will be useful for school, synagogue, and public libraries.”