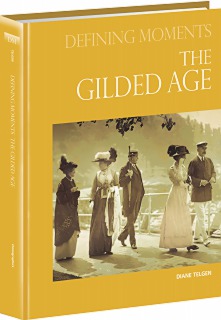 In the years following the Civil War, the United States expanded rapidly. As the nation became industrialized, wealth became consolidated in the hands of the leaders of industry, who amassed staggering fortunes on the backs of workers, who earned very little. The gaping chasm of this economic inequality stirred many cultural, social, and political changes, a period that in many ways mirrors the inequality in contemporary American life.

Defining Moments: The Gilded Age presents an authoritative account of the origins and progression of the industry-driven economic changes that followed the Civil War. It also explores the event’s lasting impact on America’s political and cultural landscape. The volume is organized into three distinct sections—Narrative Overview, Biographies, and Primary Sources—which offer a one-stop resource for student research.

Each volume in the Defining Moments series covers a wide range of topics that students can use as starting points for further research. Potential research topics for Defining Moments: The Gilded Age are below:

“[The first section] is a clear and objective narrative overview with chapters about economic expansion, robber barons and corruption, reform movements, labor unrest, and analysis of the era’s legacy and its parallels in our own stratified society. … This well-written book offers both historical and contemporary analyses, making it a good choice for collections that need report information about an often-overlooked time in American history.”

“This narrative provides a detailed and fully researched explanation of the Gilded Age. … This series is a solid start for research assignments, as it engages students in history and helps them narrow their topics while providing numerous resources for further research. This easy-to-read and navigate resource is a recommended purchase for library collections serving middle and high school students.”