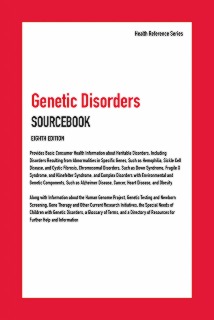 Genes provide the information that directs the human body’s basic cellular activities. Research on the human genome has shown that the DNA sequences of any two individuals are 99.9 percent identical. That 0.1-percent variation, however, is profoundly important. It contributes to visible differences, such as height and hair color, and invisible differences, such as the increased risk for—or protection from—a myriad of diseases and disorders. As medical researchers unlock the secrets of the human genome, they are learning that nearly all diseases have a genetic component. Some are caused by a mutation in a gene or group of genes. Such mutations can occur randomly or as the result of exposure to hazardous conditions or substances. Other disorders are hereditary. These can be passed down from generation to generation within a family.

Genetic Disorders Sourcebook, Eighth Edition offers updated information on where genes are located in the cell, how genes work and how genetic mutations affect health. It provides facts about the most common genetic disorders, including those that arise from mutations in specific genes—for example, muscular dystrophy, sickle cell anemia, and cystic fibrosis—as well as those arising from chromosomal abnormalities—such as Down syndrome and fragile X syndrome. It also details genetic testing and disorders arising due to abnormalities in specific genes such as albinism, alpha-1 antitrypsin deficiency, blood clotting deficiency disorders, connective tissue, endocrine disorders, cystic fibrosis, growth disorders, and others. It explains chromosomal abnormalities and their associated conditions. A section on disorders with genetic and environmental components describes how the environment affects our health and our genes. The hereditary components of Alzheimer disease, cancer, diabetes, mental illness, obesity, addiction, and others are also discussed and also provide updated information about the prognosis of a genetic condition and current treatment approaches. Reports on current research initiatives provide detailed information on the newest breakthroughs in the causes and treatments of genetic disorders, including strategies—such as gene therapy, nutrigenomics, and pharmacogenetics—that could radically change how these disorders are treated in the future. A section for parents of children with genetic disorders offers information about assistive technologies, educational options, transition to adulthood, and estate planning. Information about genetic counseling, prenatal testing, newborn screening, and preventing genetic discrimination is also provided. The section also offers pointers for caregivers of people with genetic disorders. The book concludes with a glossary of genetic terms and a list of resources for additional help and information.

Part I: Introduction to Genetics talks about the cell, nucleus, the DNA, and the structure of genes and chromosomes in the human body. It describes how genes work and explains how genetic mutations affect health. It details how genetic inheritance works, explains when genetic counseling might be advisable, and describes how genetic testing works and the type of information it can provide. The part concludes with a detailed understanding of genetic testing and screening.

Part III: Chromosome Abnormality offers detailed information about the types of disorders caused by chromosome changes. Individual chapters and sections for each condition explains how Down syndrome, fragile X syndrome, Smith-Magenis syndrome, Turner syndrome, and other chromosomal disorders are inherited and describes the diagnostic tests and treatment techniques used.

Part IV: Complex Disorders with Genetic and Environmental Components explains what is gene-environment interaction and understanding biological pathways in multifactorial complex diseases. It explains how genes and environments interact and also covers the causes of addiction, obesity, mental health disorders, asthma, heart disease, metabolic syndromes such as diabetes, cancer, autoimmune disorders, and other disorders with both genetic and environmental components. Individual chapters and sections describe the genetic associations related to each disorder and discuss the research advances that may lead to improved prevention efforts and treatment outcomes.

Part V: Current and Future Approaches for Treating Genetic Conditions describes the prognosis of a genetic condition and how it is currently managed. It also talks about recent advances in the field of genetics as doctors seek ways to use knowledge of an individual’s genetic background to target disease prevention and treatment techniques. It includes a discussion of what has been discovered during the course of the Human Genome Project and describes promising new avenues of research, including pharmacogenomics and gene therapy. Individual sections discuss safety and ethical issues around genetic therapies. The part concludes with a discussion on the role of genomics and genome sequencing in tackling rare genetic disorders more effectively.

Part VI: Living with a Genetic Disorder addresses the need for guidance for caregivers of adults with genetic disorders. It also details the challenges that parents face when raising special needs children. It discusses early interventions, assistive technologies, educational concerns, and the transition into adulthood. The part also explains government benefits available to children and adults with disabilities and offers estate planning information for families of children with special needs. The part concludes with details on insurance coverage resources for those living with a genetic disorder, and the challenges in health equity for people with genetic disorders.

Part VII: Additional Help and Information includes a glossary of terms related to human genetics and a directory of resources offering additional help and support.