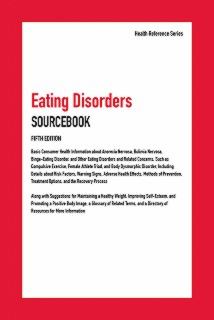 According to the National Eating Disorders Association, 20 million women and 10 million men in the United States suffer from a clinically significant eating disorder at some time in their life. Suicide, depression, and severe anxiety are common, and eating disorders can lead to major medical complications, including electrolyte imbalance, cognitive impairment, osteoporosis, infertility, or even death. Furthermore, although eating disorders can be successfully treated—even to complete remission—estimates suggest that only one in ten people with an eating disorder receives treatment.

Eating Disorders Sourcebook, Fifth Edition, provides basic consumer health information about anorexia nervosa, bulimia nervosa, binge eating disorder, and other eating disorders and related concerns, such as female athlete triad, the abuse of laxatives and diet pills, and rumination disorder. It explains the factors that put people at risk for developing eating disorders, and it discusses their adverse health effects and the methods used to prevent, diagnose, and treat them. Tips for determining a healthy weight and promoting self-esteem and a positive body image are also included, along with guidelines for safe weight loss and exercise, and a glossary of terms related to eating disorders, and a list of resources for further information.

Part One: What Are Eating Disorders? defines eating disorders and explains how they differ from disordered and normal eating patterns. It describes the most common types of eating disorders, as well as other related disorders that often accompany them, such as body dysmorphic disorder and compulsive exercising. The part also examines popular eating disorder myths.

Part Three: Causes of Eating Disorders explains what is known about the biological factors and genetic predispositions that may lead to the development of certain eating disorders. Environmental factors that can cause eating disorders are described, as well as the effect of the media in distorting body image and encouraging these disorders.

Part Five: Recognizing and Treating Eating Disorders describes the physiological and behavioral warning signs of an eating disorder and provides suggestions for confronting a person with an eating disorder. It explains the treatment process, from determining the level of care needed to choosing a treatment facility. It also details the different treatment options available, including medications, psychotherapeutic approaches, and insurance coverage for such treatments. Issues common to the recovery process such as overcoming negative thoughts and preventing relapse are also discussed.

Part Six: Preventing Eating Disorders and Achieving a Healthy Weight offers guidelines for the prevention of eating disorders, including tips for promoting self-esteem and a positive body image. It explains how people can determine a medically optimal weight for themselves and offers suggestions for safe weight gain, loss, and maintenance. Nutrition guidelines and suggestions for exercising safely are also included.

Part Seven: Additional Help and Information includes a glossary of terms related to eating disorders and a directory of resources for additional help and support.