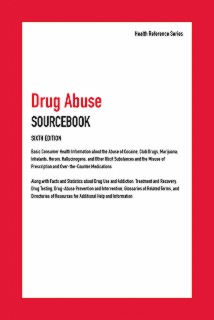 Drug abuse remains a growing problem in the United States. A recent National Survey on Drug Use and Health (NSDUH) found that 27 million people aged 12 or older used an illicit drug in the past 30 days, which corresponds to about 1 in 10 Americans. The higher percentage of people who were current illicit drug users in the most recent survey appears to reflect trends in marijuana use. Non-medical pain reliever use continued to be the second most common type of illicit drug use in the most recent survey, and while the percentage of people aged 12 or older who were current non-medical users of pain relievers (1.6 percent) was lower than the percentages in past years, it was similar to the percentage in the previous year’s survey. Abuse of tobacco, alcohol, and illicit drugs costs the nation more than $700 billion annually in costs related to crime, lost work productivity and health care according to the National Institute on Drug Abuse (NIDA).

Drug Abuse Sourcebook, Sixth Edition, provides updated information about the abuse of illegal drugs and the misuse of prescription and over-the-counter medications. It offers facts and statistics related to U.S. drug-using populations and presents details about specific drugs of abuse, including their health-related consequences, addiction potential, and other harms to individuals, their families, and communities. Drug treatment and recovery options are discussed, along with information on drug testing and drug-use prevention strategies for schools and others seeking help for themselves or a loved one. The book concludes with glossaries of terms related to drug abuse and directories of resources for additional help and information.

Part I: Facts and Statistics about Drug Abuse in the United States presents core data regarding the drug abuse problem, detailing the prevalence of drug abuse and the costs to society in terms of medical care, hospitalization, social consequences, and treatment outcomes. It also discusses federal regulation of prescriptions, laws pertaining to illegal and legal drugs, and the current debate over medical and legalized marijuana.

Part II: Drug Abuse and Specific Populations describes drug use initiation and the effects of drug abuse on various groups of people, including children, adolescents, and women. It also addresses different social factors affecting drug abuse, such as socioeconomic or employment status, and it considers drug use in inmate, veteran, senior, and disabled populations.

Part III: Drugs of Abuse provides facts about illicit and misused substances, such as performance enhancers, cannabinoids, inhalants, hallucinogens, narcotics, sedatives, and stimulants, including anabolic steroids, marijuana, Rohypnol, ecstasy (MDMA), LSD, heroin, hydrocodone, cocaine, methamphetamine, and many others. The part concludes with information about new and emerging drugs of abuse.

Part IV: The Causes and Consequences of Drug Abuse and Addiction explains the science behind addiction and what is known about the risk factors that can lead to drug dependency. Concerns related to coexisting alcohol problems or multidrug use are addressed, and the medical, legal, financial, and social ramifications of drug abuse are discussed. The part also looks at the connection between substance abuse and infectious diseases, and it addresses related mental health issues, including suicide ideation.

Part V: Drug Abuse Treatment and Recovery offers suggestions for recognizing the existence of a drug problem and options for taking steps toward achieving and maintaining a healthy lifestyle, including first aid, intervention, and detoxification. It provides details about various treatment approaches and reports on strategies for sustaining recovery. The part also discusses the legal rights of those in recovery and concerns related to the criminal justice system.

Part VI: Drug Abuse Testing and Prevention lays the groundwork for responses to drug abuse—in society, in schools, and especially in the home. It discusses the influence of parents on their children’s choices related to drug abuse, and it addresses concerns about preventing drug abuse in the workplace. Drug testing is discussed in detail, and federal drug abuse prevention campaigns are described.

Part VII: Additional Help and Information provides resources for readers seeking further assistance. It includes a glossary of terms related to drug abuse and a listing of street terms for common drugs of abuse. It concludes with directories of state substance abuse agencies and other organizations providing resources on drug abuse and addiction.