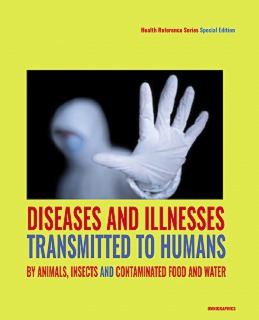 According to statistics provides by the Centers for Disease Control and Prevention (CDC), it is estimated that, every year in the United States, around 3,000 people die from food-borne diseases and about 128,000 people are hospitalized with them. The CDC’s estimate for the number of people affected by vector-borne diseases is around 640,000 cases between 2004 and 2016. Globally, malaria causes 400,000 deaths every year. Estimates show that more than 6 out of every 10 known infectious diseases in people are spread by animals, and 3 out of every 4 emerging infectious diseases in people are spread by animals. Every year, the United States registers an estimated 4 to 32 million cases of people affected with acute gastrointestinal illness (AGI) caused by consumption of water from public drinking-water systems.

Diseases and Illnesses Transmitted to Humans from Animals and Insects and Contaminated Food and Water explains the various diseases and illnesses that are spread by animals, insects, and through the contamination of food and water, along with the processes involved in identifying an outbreak of these illnesses and diseases. The book also provides tips and safety measures to protect yourself and your family, including an explanation of the epidemiology of emerging and reemerging infectious diseases caused by these pathogens. It also includes a directory of organizations that provide additional help and information.

Part I: Animal-Borne Illnesses and Diseases describes the animal-borne diseases, along with information about emerging and zoonotic infections. It discusses pets and people at risk and the diseases that are spread by animals.

Part II: Insect-Borne Illnesses and Diseases explains the vector-borne diseases, along with other related diseases such as rickettsial zoonoses, Lyme disease, leishmaniasis caused by bacterias, arbovirus, protozoan parasites, and pathogens.

Part III: Food- and Water-Borne Illnesses and Diseases discusses the illnesses and diseases caused by the consumption of contaminated food and water. It provides information about the major sources of water contamination and its impact on children, along with the magnitude and burden of water-borne diseases in the United States.

Part IV: Animal-, Insect-, Food-, and Water-Borne Illnesses and Diseases and Outbreaks describes the identification and outbreaks of animal-, vector-, and food-borne diseases, along with information on how to identify and track animal-, insect-, food-, and water-borne diseases.

Part VII: Additional Help and Information consists of a glossary of related terms, along with a directory of organizations that provide help and information regarding animal-, insect-, food-, and water-borne diseases.