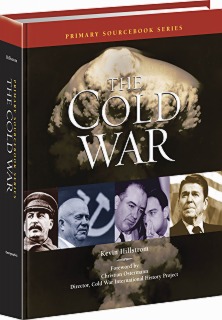 Primary Sourcebook Series: The Cold War assembles more than 100 primary documents to help users gain a greater understanding of this pivotal moment in world history. This volume includes excerpts from a wide array of speeches, bills, reports, oral histories, personal memoirs, editorials, letters, and other primary documents. The voices included here range from political leaders and diplomats to journalists, activists, and ordinary citizens. Their documents are arranged in chronological sections or chapters that contain introductory material that explains the larger context in which the documents were created.

The Cold War provides extensive coverage of all major aspects of the Cold War, including the Post-World War II creation of the Iron Curtain, McCarthyism, the nuclear arms race, wars in Korea and Vietnam, the Cuban Missile Crisis, the détente era, the Reagan-Gorbachev summits, and the final collapse of the Soviet empire.

A few of the notable primary sources in The Cold War:

Other valuable features provided in this volume include a foreword by Christian Ostermann, Director of the Cold War International History Project; glossary of important individuals and terms; detailed chronology of events; extensive bibliography of works consulted in the creation of the book, including books, periodicals, internet sites, and other media materials; and a subject index. For a more complete understanding of the coverage offered in Primary Sourcebook Series: The Cold War, please see the Sample Pages.

"This comparison of viewpoints should greatly expand readers’ understanding of the complexity of world issues and how they can be affected by ideology. The balanced selections reveal historical misjudgments as well as wise decisions.’’