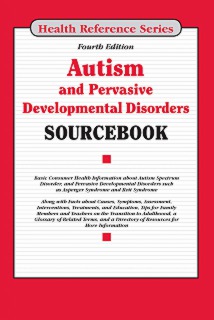 Autism and Pervasive Developmental Disorders Sourcebook, Fourth Edition provides updated information about the specific types of autism spectrum disorders. It explains symptoms, assessment, and diagnosis of ASD and describes the importance of early interventions. Evidence-based behavior, communication, and biomedical interventions are presented, along with educational guidelines for teachers and parents of children with ASD. Support, safety, transition, mental health, and employment information for families and individuals affected by ASD is also provided and it concludes with a glossary of related terms and a directory of resources offer additional help and information.

This book is divided into parts and chapters where parts focus on broad areas of interest and chapters are devoted to single topics within a part.

Part Three: Identifying and Diagnosing Autism Spectrum Disorders describes the range of symptoms and developmental milestones and delays that indicate a need for further assessment of autism spectrum disorders. Developmental screening, medical and genetic tests, and other assessments are explained. The part also talks about speech and language development in children, and measuring autistic intelligence. A separate chapter reviews options for moving forward after receiving an ASD diagnosis.