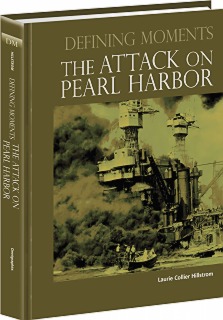 The Attack on Pearl Harbor

The infamous attack on December 7, 1941, on the United States naval base at Pearl Harbor was supposed to be the Empire of Japan’s final step in a its quest for total domination of the Pacific. Instead, the attack served to mobilize the U.S. to fight wars on two simultaneous fronts. The result was the defeat of Japan, the destruction of global fascism, and the emergence of the U.S. as a modern superpower.

Defining Moments: The Attack on Pearl Harbor presents an authoritative account of the origins and progression of the Japanese assault that triggered America’s involvement in World War II. It also explores the event’s lasting impact on America’s political and cultural landscape. The volume is organized into three distinct sections—Narrative Overview, Biographies, and Primary Sources—which offer a one-stop resource for student research.

Other notable features include a glossary of important people, places, and terms; a detailed chronology featuring page references to relevant sections of the narrative; an annotated listing of selected sources for further study; an extensive general bibliography; and a subject index. For a more complete understanding of the coverage offered in The Attack on Pearl Harbor, please see the Sample Pages.

Each volume in the Defining Moments series covers a wide range of topics that students can use as starting points for further research. Potential research topics for Defining Moments: The Attack on Pearl Harbor are below:

“Beyond its fine organizational structure and the remarkable amount of research contained in this text, its most impressive feature is its readability. Written more like an interesting story than a dry historical reference, this book should not only enlighten but also hold the attention of middle and high school students, particularly boys.”

“The quality of Hillstrom’s clear prose and meticulous research is first-rate. Events are extensively chronicled to give readers a sense of what transpired. Black-and-white photos appear throughout. This work is a must-have for reports and assignments.”

“With this volume, Hillstrom adds another well-written book to the publisher’s Defining Moments series, which provides concise information on specific American historical events. … Like all books in this series, this affordable volume would make a nice addition to a school media center or public library collection.”

“This title will serve as a useful starting point for research on this topic and will serve its intended audience well.”

“This book explores every aspect of the attack on Pearl Harbor. Written with a neutral viewpoint and chock-full of factual information, it will encourage students to read out of curiosity.”