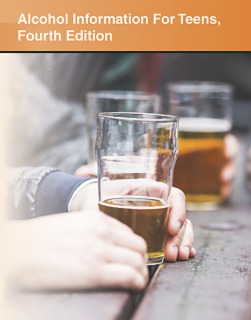 Alcohol consumption can have negative effects on the still-maturing teen brain, and research has shown that the earlier teens begin drinking the more they risk developing alcohol dependency and other adverse conditions.

Alcohol Information for Teens, Fourth Edition provides updated information about the use and misuse of alcohol. It describes ways alcohol can affect mental and physical health. It discusses the special vulnerabilities of the teen brain and the changes in brain functioning that lead to dependency. A section on treatment and recovery discusses achieving and maintaining sobriety, and a section on alcohol abuse in the family addresses the special concerns of teens that live with an alcoholic relative. The book concludes with resource directories for finding help or more information about alcohol and substance abuse.

Part One: About Alcohol And Alcohol Abuse explains the ways in which people use alcohol, and it addresses practices associated with alcohol misuse and the development of dependency. It identifies adult drinking patterns that have not been linked to adverse consequences, and it provides details about other patterns—such as binge drinking, underage drinking, and heavy drinking—that can seriously impact health.

Part Three: Alcohol’s Physical Effects explains what happens inside the body and the brain when alcohol is consumed. It describes the factors that contribute to blood alcohol concentration (BAC) and how increasing BAC plays a role in hampering physical and mental functioning. Some of the most common circumstances in which alcohol can damage other organs or contribute to cancer development are also described. The part concludes with information about the devastating ways alcohol can affect fetal development.

Part Four: Mental Health And Behavioral Risks Associated With Alcohol discusses the correlation between teen drinking and depression, bipolar disorder, schizophrenia, anxiety disorders, and other mental health concerns. It describes the process by which addiction develops and discusses how alcohol use can contribute to risky or violent behaviors.

Part Five: Alcoholism Treatment And Recovery offers facts for teens who already drink and want to quit and for teens who want to understand the challenges faced by others who are struggling to achieve and maintain sobriety.

Part Six: Alcoholism In The Family addresses teens who live in an uncertain or inconsistent home environment because they have a parent, grandparent, sibling, or other close relative or caregiver with an alcohol abuse disorder. It explains some of the challenges often experienced in relationship patterns and answers questions about the role of family history in the development of alcohol addiction. It also offers tips for discussing alcohol-related concerns in a positive way.

Part Seven: If You Need More Information provides directories of resources for additional help about alcohol and other substance abuse concerns.