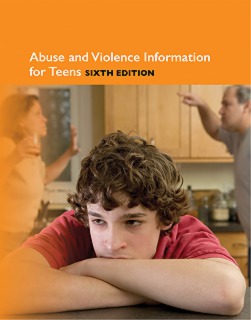 Teens experience violence in many forms, including bullying, fighting, hazing, dating violence, sexual abuse, domestic violence, and even homicide. According to a report from the Centers for Disease Control and Prevention (CDC), it is estimated that 1,750 children died of abuse and neglect in the United States in 2020. About 1 in 4 girls and 1 in 13 boys in the United States experience child sexual abuse among which 91 percent of cases has been perpetrated by someone known and trusted by the child or child’s family members. This is likely an underestimate because many cases are unreported. Each day more than 1,000 youth are treated in emergency departments for physical assault-related injuries. The physical and emotional scars resulting from these experiences can endure a lifetime.

Abuse and Violence Information for Teens, Fourth Edition discusses contributing factors and warning signs for the most commonly experienced types of abuse and violence. Facts about seeking medical care and mental-health services for the physical and emotional consequences are included. A section on prevention and safety suggests ways to protect teens against violence and offers guidelines for staying out of harm’s way. In addition, information about the legal rights of a victim of sexual assault is provided, and the book features resource directories and information on how and where to report abuse.

Part 1: Abuse and Its Types talks about the different types of abuse such as physical abuse, emotional and verbal abuse. It explains other forms of sexual abuse such as child, sibling and elder abuse, stalking, incest, and sexual coercion. It also discusses the role new technologies play in child pornography, sexual exploitation, online sextortion and human trafficking.

Part 2: Violence and the Teen Experience explains teen exposure to violence, crime, and abuse. It discusses the possible risk factors and warning signs for youth violence, including electronic aggression and substance abuse. It talks about teen dating violence, bullying, hazing and hate crimes. The part concludes with facts about the effects of school violence exposure, teen suicide, and violence against the LGBT community.

Part 3: Recognizing and Treating the Consequences of Abuse, Neglect and Violence outlines the impact of sexual abuse on the physical, mental, and psychological health of the victims. It explains what to do after a sexual assault, including seeking mental-health services, and discusses the long-term consequences of child abuse and neglect. It also discusses teen depression, posttraumatic stress disorder, trauma-focused interventions for youth psychotherapies, and therapeutic approaches for victims of sexual assault and abuse.

Part 4: Staying Safe, Prevention of Abuse and Your Legal Rights as a Victim discusses how domestic violence and abuse can be prevented and treated. It also explains preventing violence at schools and promoting protective factors for children exposed to domestic violence. It talks about conflict resolution, suicide prevention, and how the child welfare system works. It concludes with information about the legal rights of a victim of sexual assault.

Part 5: If You Need More Information includes resource directories, and information on how and where to report child abuse.